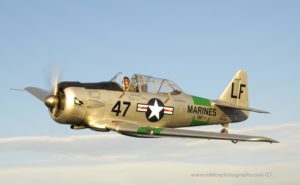 Ever thought what it was like to train and fly as a WW2 fighter pilot? Or experience the thrill of the Reno Air-race? Our 1943 North American US Navy trainer the SNJ-5b or more commonly known as the (T6) Harvard has done all that. Firstly, our SNJ-5B was used for training navy pilots for Wildcats, Corsairs or Mustangs. From there it went on to race at Reno between the 1960s to the late 1980s. Come and experience the golden years of piston engine aviation in a supercharged, 9 cylinder; 600 horse power fighter trainer.

Your experience will include a full mission brief tailored to your desires of aerobatic, mock combat or scenic flights. Once briefed, you will complete a pre-mission flight check with your pilot. You’ll then be strapped in and you will experience firsthand the basic necessities of military aircraft. Shortly after take-off you will begin your mission pulling both positive and negative ‘G’ as you go through loops, rolls and inverted flight as mild or as wild as you dare.

Your 30 minute mission will depart from Essendon Airport in one the most successful military trainers in the world.

This aircraft operates regularly in Air Displays for the RAAF Museum. We also have the ability to conduct training programs in our warbirds.

Introductory flight in an advanced US Navy trainer.

Experience a WWII SNJ-5B flight and the sights of Melbourne

Our beautiful Harvard is an ideal aircraft to experience the sights of Melbourne. This mission includes take-off from Essendon airport, out to the west gate bridge, around the city of Melbourne and land back Essendon airport. Although this a short 10 minute (15 minutes in the aircraft) flight, it will certainly give you the WWII fighter experience along with some stunning views of Melbourne city. This is an excellent introductory to ex-military aircraft and will leave wanting more!

What is a Warbird?

Any ex-military aircraft operated in non military roles is a Warbird. This can mean anything from a Vintage WWI Sopwith Camel to a Mach 2 Mig 21. These aircraft are usually owned and operated by enthusiastic private individuals who occasionally make them available for passenger flights, or for training other prospective Warbird pilots. We own and operate a SNJ-5B (Harvard) VH-OVO, and have been providing adventure flights and training services to future Warbird pilots since 1989. We are also proud to offer our clients the the thrill of flying in a TS-11 Iskra Advanced Jet Weapons Trainer, with a top Speed 389 kts (750 kph)/Altitude 33,000 ft. Design Load Factor +8G to -4G.

For many years, aviation authorities banned any civilian operation of ex-military aircraft. After much representation by interested people, they recognised the fact that when properly maintained and flown, Warbirds are very safe, and they then permitted a limited role for these aircraft. Specific people in the aviation industry are permitted to train others in Warbird operations, and under certain circumstances permitted to take paying passengers. The Civil Aviation Safety Authority (CASA) and Australian Warbirds Association Limited require passengers to understand the following:

(a) the design, manufacture, and airworthiness of the aircraft are not required to meet any standard recognised by CASA; and

(b) CASA does not require the aircraft to be operated to the same degree of safety as an aircraft on a commercial passenger flight; and

(c) the passenger flies in the aircraft at his or her own risk.

By virtue of the fact that these aircraft are extremely valuable, they are maintained and flown to very high standards usually by their owners, and have excellent safety records. Because of the widely different design philosophy of military aircraft, they are not certified to any defined civilian standard, but flown under an exemption to normal standards. For this reason, you will see in the cockpit of a passenger carrying Warbird a notice to this effect. This does not mean they are unsafe, just that civilian aviation certification rules were not written for this type of aircraft, and you, as the passenger, should be aware of this.